"Don't Worry, Be Happy" is Not a Plan: Give me a Lever 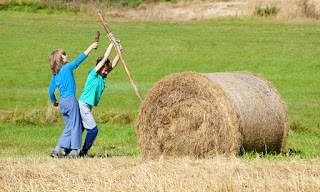 “Give me a place to stand, and a lever long enough, and I will move the world.”
Archimedes

The famous quote by Archimedes is fundamentally about the mechanics of leverage. You might remember a teacher explaining fulcrums and levers, and how a lever could help you move a heavy weight with less force than otherwise needed. Though the mechanics are interesting, what captivates me most in this is the simple idea of there being a lever to pull that will make something else happen.

Over my career, I keep returning to the importance of differentiating between the kinds of constructs used by researchers to describe romantic relationships. I believe some constructs imply levers that might be pulled to cause an effect, and others do not. This distinction matters theoretically and in our personal relationships.

Psychologists use the term “construct” to refer to cluster of things that reflect a concept. It is easy to think of a construct in the way most people use the term variable, but the idea of a variable usually refers to a specific measure of a construct as used in a study. Common constructs in the study of romantic relationships are things like satisfaction, commitment, conflict, appreciation, forgiveness, distress, attachment, and communication. A variety of things can be included in a construct but, in each case, there is a ball of stuff around a label reflecting one inherent thing. A construct has a clumpy, thingness to it.

When it comes to romantic relationships, satisfaction has gotten the most attention. Satisfaction is part of the same ball of stuff as happiness. This clump represents an overall, broad sentiment about a relationship.[i]

As a researcher and intervention minded psychologist, I’m not wild about the construct of satisfaction, and I can explain why. Think about some other constructs relevant to romantic relationships.

What is different about these constructs from satisfaction? First, notice that all those terms refer to something more specific than satisfaction. If your friend has started dating someone, and you are curious to know how it’s going, you might text and ask, “do you like her?” The answer will tell you a lot without telling you anything specific. Liking, happiness, and satisfaction are all part of the same clump of non-specific positive sentiments.

Satisfaction, and anything like it, will predict a good deal about the future of a relationship. It is an important construct and nearly always measured in relationship science. It also can cause other things and yet still be relatively lever-less. For example, if a person is not satisfied in their relationship, they may give their partner less attention and their relationship will deteriorate further. In that case, satisfaction is causal by way of motivation—demotivating, really.

The notion of levers focuses attention on a different thing than just causality. A construct with a lever will reflect something that could be plausibly acted on by will. Thus, having a lever means the construct is potentially both causal and possible to direct.

Let’s say you wanted to increase satisfaction in your relationship this week. I do not think you will get very far with a plan that merely specifies your objective. Can you will yourself to be happier? I cannot. Can you decide to just be more satisfied with your partner? You could, but if you decide to do that you will shortly thereafter be thinking about your options to do something that could make that happen. A construct with a lever will imply an answer to a question, “What has a lever I could go pull this evening, that would probably have a good effect on my relationship, tonight, this week, or this year?"

You can see this principle in various things my colleagues and I have written over the years about commitment. The following is a passage from a chapter on how to use commitment theory in marital therapy (from Stanley, Lobitz, & Dickson, 1999)[ii]:

While satisfaction is certainly a crucial construct, focusing on it alone will lead to incomplete understandings of the complex motivations that underlie stay-leave decisions (Johnson, 1978, 1982, 1985; McDonald, 1981; Stanley & Markman, 1992; Rusbult, 1983). Furthermore, satisfaction alone gives therapists little instruction in how to help unhappy couples. "Don't worry, be happy" makes a great motto, but it does not offer much in terms of specific therapeutic strategies.
. . .
The good news is that the factors that underlie dedication are things about which people have choices. People can choose how they will handle the allure of alternatives. People can choose the priority they will place on their relationships. People can choose to nurture a positive, long-term vision for their relationship.

There are many models of measurement and theory about commitment, but one that resonates the most with me contrasts commitment as constraint and commitment as dedication. Constraints are things that can lead someone to remain in a relationship, whether or not they want to, and constraints tend naturally to build up over time. They often function harmlessly or even positively (as evidence of investment and a brake on ruining years of investment during a down time), but if satisfaction is low, they are what makes a person feel trapped. Constraints are hard to change or change quickly. Dedication, in contrast, is loaded with parts (sub-constructs) that are festooned with possible levers.

Consider this next list and how everything on it reflects not only something that will tell you something about a person’s commitment to their partner but will also leave a clue about aspects of behavior that might be changed to make a difference.

Priorities
A desire for a future together
Sacrifice
Couple identity

A person can think about ways to make their relationship a higher priority, and likely do something even slightly different the next day. For example, a person can choose to find ways to reinforce something about the future they want with their partner. That could mean planning a trip together or simply talking about the future with their significant other. Sacrifice, especially in little things, can also play a potent role in signaling commitment. There is a small but conceptually tight literature on sacrifice that suggests that, aside from situations where sacrifice is grossly uneven or resented, little sacrifices are going to make a positive difference.[iii] I have written a briefarticle about some of the ways one can focus on small acts of sacrifice in their relationship. Small positive sacrifices not only reflect this idea of levers, they might also have the very property Archimedes touted where a little effort can do a lot.

Here is a similar distinction in another paper, where we are differentiating dedication from romantic attachment (from Stanley, Rhoades, & Whitton, 2010)[iv]:

If commitment develops partly to secure romantic attachments, which aspects of the broader construct of commitment serve this purpose? . . . Constraint can foster a sense of permanence, which can contribute to overall security, but dedication will be reflected in behaviors that are more readily seen as under personal control, and, thereby, informative about commitment in ways that fosters trust and security between partners.
. . .
One of the important differences between commitment and romantic attachment lies in the fact that intention is central in understanding commitment while romantic attachment only implies depth of emotional connection.

These examples are focused on aspects of commitment because that has been a focus of a lot of my thinking about relationships, but it is just an example of my main argument about constructs with levers. I often similarly contrast communication with satisfaction, where communication implies loads of levers and satisfaction does not.

I bet Archimedes believed that he could literally move the earth with a long enough lever, a fulcrum, and a place to stand just beyond it—hypothetically, of course. And you and me? Sometimes we’re looking too hard for something to rock our world when we just need to pull the lever that is nearest to where we presently stand.

Special thanks to Troy Fangmeier for help in editing this piece. A shorter version of this piece first appeared at my blog for Psychology Today on 12-3-2019.

[i] In fact, satisfaction is potentially so broad a construct that many in my field of family psychology keep referring back to a concept of positive sentiment override, a term put forth by Robert Weiss to describe a phenomenon where one partner can hold such a positive overall sentiment about the other partner that pretty much nothing but positive can be seen. There can be negative sentiment override, also. This idea comes up often in discussions with colleagues over the years when the question is asked if some other construct is really just satisfaction by a different name. Citation: Weiss, R. L. (1980). Strategic behavioral marital therapy:  Toward a model for assessment and intervention, Volume 1. In   J. P. Vincent (Ed.) Advances in Family Intervention, Assessment, and, Theory (pp. 229-271). Greenwich, CT: JAI Press.