Sawhill and Venator on The Hopes of Marriage Traditionalists vs. Village Builders

Isabel Sawhill is an economist at Brookings who has just published an important book on the changes in families in the U. S. over the past decades (Generation Unbound, 2014). She describes how we’ve arrived at a nation that, increasingly, is made up of drifters versus planners when it comes to sex, childbearing, and parenting. Her book details the large consequences of these changes, including covering the staggering increases in the number of children born outside of marriage and being raised by single parents.

Sawhill wrote a recent piece that appeared in the New York Times, entitled Beyond Marriage, in which she talks about both the problem and her belief in solutions involving long-acting birth control methods that could change the default from people having children without planning to people needing to plan to have children. As you can imagine, elements of those ideas are controversial. But her description of the issues and problems is not controversial. She unflinchingly describes the massive ways our society has changed (for many but not all people, of course) when it comes to family formation and the wellbeing of children. Drifting, indeed, has become common, and drifting, like sliding, does not bode well for relationship transitions that are fundamentally life-altering (and, in this case, life creating).

In a piece on the Brookings site, What Liberals and Conservatives Are Missing in the Marriage Debate, Sawhill and Joanna Venator contrast the hopes of liberals and conservatives for what we could possibly do about the declines in marriage as a foundation for childbearing and childrearing. As they note, “Traditionalists” hope to bring marriage back and “Village Builders” hope to increase the supports and resources around single parent families in order to make up for some of what is lost in terms of resources available to parents and children.

Sawhill and Venator make this compelling point along the way. They write:

“…for every child removed from poverty by a social program, another one is entering poverty because of the breakdown of the family. The growth in single parent families since the 1970s has caused child poverty to rise by roughly 5 percentage points as much as the poverty-reducing effect of some of our biggest safety net programs, such as Food Stamps.”

Here’s the nifty graphic from the Brookings piece that illustrates that quote. 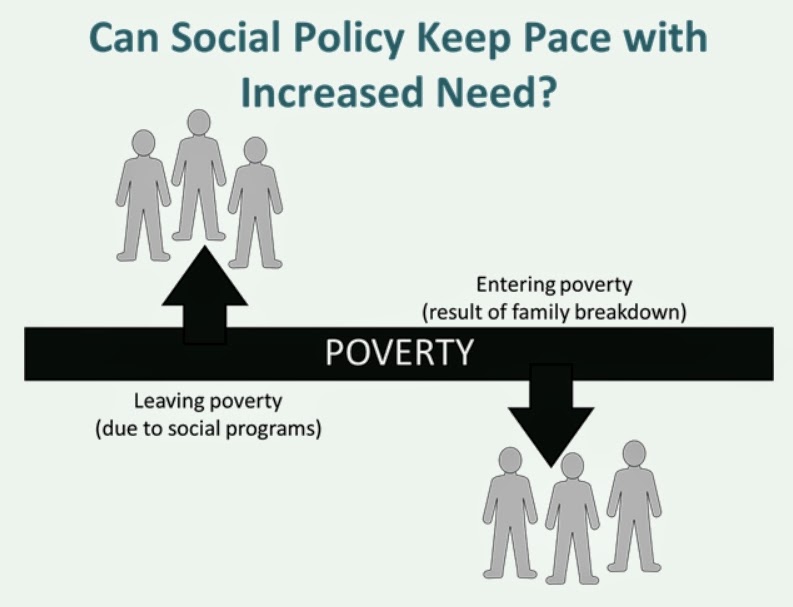 Sawhill and Venator write cogently about the reasons for pessimism when it comes to what either Traditionalists or Village Builders hope for at this point. The one thing I appreciate above all else in Sawhill’s recent arguments is that she’s dealing with reality. I want to be an optimist about marriage, but I’m not. Don’t get me wrong on this point. I think marriage is the best path for the greatest number of people. Among many reasons, marriage is powerful for child outcomes because, historically, marriage set a strong(er) context of commitment around a couple before there was a family. (See my prior post here or at the Institute for Family Studies on this crucial point.)

So, while I am pessimistic in a number of ways about marriage, I work toward the vision of the optimists when it comes to the institution. But the cultural trends are huge. Along with my concerns about the future of marriage, I am as or more pessimistic about our society having enough resources to, in any realistic way, support strategies sufficient to cope with the massive changes we now confront. Even if we did a lot more than we now do—as Sawhill wishes we were doing—I don’t see how such efforts can make up for what is increasingly left out of the equation for a growing number of children and families, which is a settled commitment between two partners before they become parents together (that sounds like marriage, I know).

I’m left with three beliefs about the problems Sawhill identifies in the recent pieces and in her book. One, I think we should continue to try to strengthen and support marriage, which includes figuring out how to counter the cultural trends that push people away from believing what is obvious: that a prior settled commitment between two parents makes a real difference for children. Two, I believe we should accept that government programs won’t be able to make up for the ways children will have differential resources and opportunities in life as a result of how families form. Should we invest in programs try to make up for what is lacking? I think so, but hopefully in thoughtful ways; which is another point that Sawhill addresses in identifying the need for increasing efforts that are geared toward self-sufficiency. Third, you may or may not feel ready for it, but it’s clear we are going to be having the cultural and societal discussion Sawhill directly addresses in her argument for one way to change the default from drifting to planning when it comes to how children enter this American life. Be thinking, because thinking and talking is on the agenda.