Attachment and the Perfect Storm


[10-30-2013:  There is a longer and updated version of this post at The Institute for Family Studies.  Click here to see that article if you wish.]


In my recent posts, I noted how there was sometimes way too little attention to how societal trends and family dynamics affect children in the ongoing and varied discussions of cohabitation, marriage, and family. Here, I want to pick up on a basic point that seems to me most important in all of these matters: the development of attachment systems in children.

Starting in the late 1950s, John Bowlby (a psychiatrist) and Mary Ainsworth (a developmental psychologist) refined and put forth a whole system of thoughts about the importance of attachment in human relationships. They focused on the ways in which the early interactions with caregivers (usually parents but also other key adults around children) in the life of a child set up powerful dynamics of security and insecurity in relationships. In a paper that became a watershed in the field of adult attachment theory, Hazan and Shaver (1987) showed how attachment dynamics beginning in childhood have important implications for adult relationships, both romantic and otherwise. While I do not believe that there is a theory of everything in psychology, many people believe that attachment theory is about as close to that as exists—at least when it comes to human interaction and associations.

In a nutshell, the entire system speaks to what happens in human relationships when children start out in life by either getting a secure sense of the dependability and availability of others or a sense that there is little security in important relationships. To break down a lot of thought into the simplest elements, many talk about the differences in adult behavior between those who started with secure attachment versus those with insecure attachment, who may then demonstrate either avoidance of attachment in later relationships or anxiety about attachment to others (with behaviors like dependency and clinginess being hallmarks of anxious attachment styles).

For my purposes here, just realize that the whole system has a massive amount of logic and empirical evidence, and it generally strongly supports the idea that secure relationships with caregivers when children are young is really crucial to both the future of an individual child as well as the overall functioning of society. 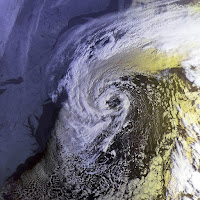 I often talk publicly about the metaphor of The Perfect Storm. You may have seen the movie. I was riveted when I watched it. The movie was about what happened in 1991 when a commercial fishing boat, the Andrea Gail, got caught in a legendary Atlantic storm. The Perfect Storm itself was caused by the unusual alignment of 3 powerful weather systems that essentially mixed over the Atlantic to create, well, you guessed it, The Perfect Storm. The name arose among climatologists who were awed by the nature of the storm—or the storm of nature. Wikipedia has information about it, if you want to read more (click here).

I like the metaphor of the storm because I believe that we may be approaching a time where such powerful systems are going to collide in such a way that the vessel of society has some serious difficulty staying afloat.

To be clear, I’m generally an optimist. Yet, to be honest, I’m really good at doom. My wife, Nancy, sometimes refers to me as her “husband of doom.” Let’s just say I have a gift for identifying risks—a gift that is not always appreciated though it is very often useful. People argue (there are books on this very point) about whether or not we are growing into an ever better society with increasing peace and health and other benefits for the greatest number of people. I understand the arguments that say we are on that path and the evidence that supports that view (there is a lot of it). But in my own world of research and thought, there is one very large, dark horizon that I worry about, and it’s this.

To me the perfect storm for society is forming from three facts.

1. Attachment is an unalterable, important human need and reality, and how attachment systems form in individuals really matters for everything else that really matters.

2. With an ever greater amount of family instability for young children, I think we pretty much have to be raising the greatest number of children ever who will grow up with serious attachment issues. (At least in this country.)

3. The cultural systems and structures that always have helped couples clarify, form, and maintain strong commitments have been steadily eroding (with an interesting exception here or there).

I will come back to point 3 in a future post, though you can read more thought on that in the article linked above now if you like. I want to focus, briefly, on point 2 in coming to a conclusion in this post.

I mentioned the work of Sara McLanahan in my post below, “Is Marriage Irrelevant.” I want to pick up on one simple, crucial point she makes in recent talks and writings, and it’s this. Because more and more children are being born in the context of an unstable (or non-existent) relationship between their biological parents, ever fewer numbers of children in the U.S. are going to have both their own parents raising them. And that has serious implications for how well people in society can attach to others.

Let’s get to the nitty gritty. When a baby’s parents do not have enough commitment in their own relationship to sustain it as a parenting relationship, they will break-up (if there was a relationship in the first place). After that break-up, the child is in the primary or sole custody of just one parent, who is most often his or her mother (it matters little which for the rest of my points). By the way, the sole or dual parent thing here is not part of my main point. Dual is great as long as the parents are not "dual"ing. Sole parents can and often do an awesome job though they have some disadvantages compared to dual parents. That’s not where I’m heading in this post.

That parent who most affects this child’s life is fairly unlikely to suddenly lose interest in having romantic connection, or even a committed partner in his or her life. That parent will become attracted to a new partner(s). Perhaps that relationship becomes serious for a while, but then it breaks up. Given the way things are, some of these romances become cohabiting relationships that maybe last longer but often break up. That intensifies what I’m trying to describe.

McLanahan notes that children born to unmarried parents are much more likely to experience these transitions in the romantic partners of their parents than other children; on average, they will experience the turn-over in romantic partner of that parent they live with a number of times. The storm that brews here is contained in this simple fact that informs the important observations of McLanahan. Let’s give it some detail:

Imagine you are 2 years old, and your mother falls in love with a man, who moves in for 13 months, and then moves on. At the very least, your world is impacted by the amount of energy your mother expends in that new romance (and new romances are very powerful). (Again, just reverse if you like if the primary parent is the father.) So, your parent is somewhat less available than before while romantically charged up. Let’s also assume that it’s pretty likely that you will be around this romantic partner a good deal, particularly if your parent and him or her start to cohabit. But that relationship ends. Now that person you attached to is gone, and often, suddenly.

Lather, rinse, repeat. Lather, rinse, repeat. Think about a child experiencing that scenario two or three times by the age of 5. I’ve not read all of what he wrote, but I don’t imagine Bowlby, in his time, could even have contemplated such a change in the way families develop at the kind of scale we’re looking at now as a society. It does not take any kind of scientist to see the implications for the growth of fundamental insecurities in the most basic human attachment systems of people as they are forming. And it really does not seem too hard to imagine the kinds of outcomes that leads to throughout society.

I could be wrong about the current direction. Sure, our society could make successful adaptations that mostly mitigate the potential force of these trends. Yet, I’m concerned about this version of the perfect storm. I do not see how it all blows over. Grab something to hang onto.