Relationship Development and Oxytocin: A Theory of Men and Women

I’m going to lay out a little theory here that is one I would love to be able to test fully in the future. It has to do with some average differences in how men and women behave during earlier periods of relationship development. This builds on themes from the prior three posts. Let’s recap a few crucial points of foundation for the theory I will lay out here:

The last point begs the question about what sacrificial behavior is linked to in women. I mentioned in the last post that Sarah Whitton and I have suggested that this is partly and simply about the fact that women are more socialized to sacrifice in romantic relationships than men—at least about daily things.

The implications of this possible difference are not very great in solid marriages. Both partners have an attachment-bond and both have developed clear, long-term commitment. Things will balance out in terms of the partners giving to each other.

What about early on in relationship development? What are the implications of such a difference? If my theory is correct—or even somewhat correct—it means that women will sacrifice more for their male partners than vice versa early on, and continue to do so for some time up until the point where the male catches up once a clear commitment to the future has developed. I’ve depicted it as follows. 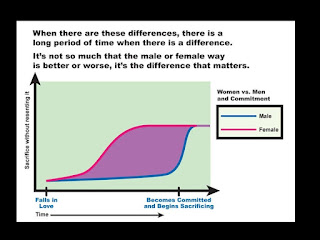 Note that the line for sacrificial behavior of the female ramps up fast and the line for sacrificial behavior of the male catches up some time later. Please note that what I depict here is the best case, not the worst. In just one form of the worst case (or a not so great case), a female sacrifices a great deal for the male and that particular male never catches up because he never really commits deeply to the future.

If I am correct in this theory, the average female is at a disadvantage once the attachment is strong and the oxytocin is flowing up until the point that the male catches up with commitment. Further, since oxytocin levels affect trust, it could be harder for the average woman to see this imbalance for some time, because the biology has primed her to see things from a trusting perspective.

PLEASE NOTE: This theory is not saying that women are superior to men or that this is a particular problem with men. In fact, in our work, find that men are just as committed, on average, as women, in marriage. What this theory suggests is that patterns of rapid relationship development (especially when things get really physical) is something people who attach strongly and rapidly need to be aware of and be cautious about—male or female. This person may give too much and not realize it for some time.

The risk I am identifying exists in any relationship where one partner feels the need to give a lot more than they are getting back. Since relationships develop so rapidly these days, I think some form of these dynamics are happening to many couples.