Many Moral Attitudes Have Changed, But Infidelity Remains Very Unacceptible


Gallup has a nice graphic out today and story about rates of acceptance of various things having to do with moral positions people hold, entitled New Record Highs in Moral Acceptability. As the Gallup piece notes, many things that used to be unacceptable have become more acceptable. But tolerance for a person having sex with someone other than their spouse is not one of them. Here is their graphic. 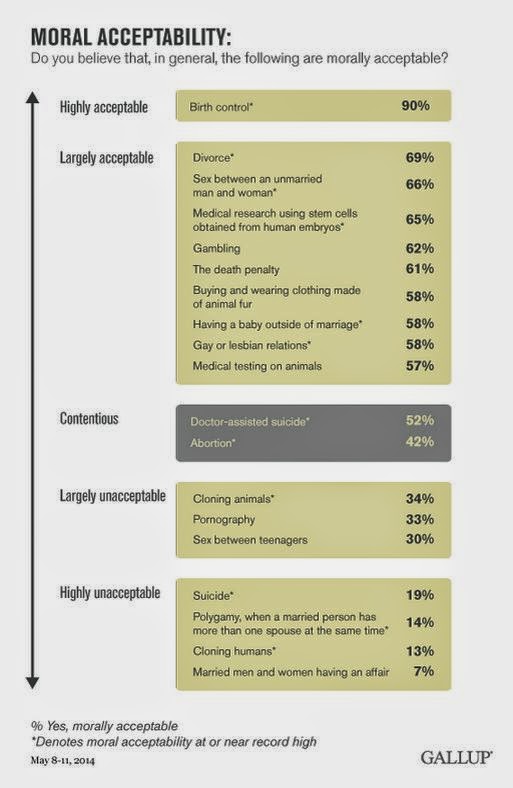 One of the oddities of how things have changed and not changed is that while romantic and sexual relationships are more ambiguous than ever, with increasingly diffuse boundaries sexually and otherwise, people, married or not, still remain strongly negative about the idea of a person having sex with someone other than their partner if they are in a relationship. For example, people in dating and cohabiting relationships also tend to expect fidelity outside of marriage. But having similar expectations about unmarried relationships does not mean the behavior is the same. People's behavior tilts strongly toward increased faithfulness in marriage while cohabitation is not actually associated with higher levels of fidelity. Many people believe that it is or should be but, in fact, cohabiters have levels of faithfulness similar to daters.

To read more about unmarrieds and extradyadic sex, I have a couple of posts from last year that might interest you (based on research in our lab).  Just click here.