PART II: Will You Be My Friend? An Interview with Craig Knippenberg


Introduction: In this post, I am continuing with the conversation I had with child therapist Craig Knippenberg regarding his video series and upcoming book, Will You Be My Friend? Understanding Your Child’s Social Brain Into Adulthood. The video series is available for viewing on YouTube and craigknippenberg.com.

I enjoy how Craig thinks about the social brain. So, this interview has more on that but also you will see how Craig is an innovator when it comes to using outdoor adventure to help teens. He makes a great point about helping our children (and ourselves) disconnect from the electronic world in order to boost the lasting emotional connection.

Question: #6 You talk about the social brain having three regions or types of functions: The President, the Furnace, and the Mirror System.  How do these three regions change in the teen brain throughout adolescence?

As any parent with a teenager knows, this is where the real fun and challenge begins. Everything changes as all three of the main social brain systems undergo massive growth. Aristotle had it pegged long ago when he said, “Teens today are as fickle in their desires as they are vehement in expressing them.” While the President is getting ready to become the master controller of a more complex adult brain, it doesn’t work very well. So, you see lots of rapidly changing impulses fueled by a doubling of emotion from the Furnace. On top of that, the social Mirror System is speeding up and growing to help form tomorrow’s leaders and politicians. While teens are learning how to influence others around them in a more complex way, lots of social hurts are going to happen. It’s sort of like taking a group juggling lesson and being asked to toss steak knives back and forth on your first try. Eventually, the group will get there, but it will take time and a lot of bandages! Many current environmental biologists argue, however, that the teen brain is doing what it is designed to do: take risks while conquering the environment, bond with the peer group, and find a mate for the procreation of our species. Sadly, while designed for species survival in ancient times, many adolescents don’t survive well into adulthood within today’s social culture. 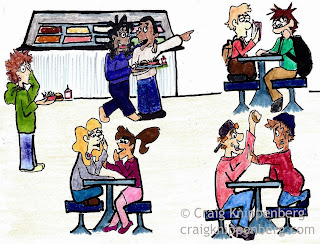 #7 Are there differences between boys and girls when it comes to our social brains?

Neurologists can tell you that the differences between the male and female brain is very small. In terms of the social brain however, there are some significant differences which compliment each other for the long term survival of our species. Go to any kindergarten classroom and you can see how the Presidential functioning is much stronger in the majority of the girls. In the teen years, you also see males making some very risky decisions and not fully thinking through the consequences to their actions. For the social brain, girls process a whole lot more non-verbal data and do so at a much faster rate. While I don’t know if he ever took a neurology class, the comedian Jeff Foxworthy was close when he joked, “When it comes to social processing, women have an eight lane super highway while men have a two lane country road.” While boys are capable of being more emotionally and socially sensitive, our ancient brains helped females carry out traditional roles like taking care of infants and working together in often hazardous environments. When taken together, these differences are designed to compliment each other and promote living and working together.

#8 How does understanding these three social brain systems help parents?

First of all, as I mentioned earlier, understanding why your child is acting the way they are can really help you be more patient and effective. Secondly, understanding your child’s unique make-up in these areas helps you provide them with the structure and guidance that they need. For example, a child who has a great social mirror system but with a weak President and Tigger emotions is going to make a lot of friends, but is then is going to need a lot of monitoring and structure to keep them and their friends safe and out of trouble. A child with a hard working President, average social mirroring skills and the anxiety of a Piglet, is going to need reinforcement for taking risks and moving past his/her anxiety. The child with low mirror abilities, a weak President and an overactive Furnace on the other hand is going to need lots of social teaching and reinforcement for handling the social world in a more positive manner. These approaches with your child’s unique make up will help them more successfully relate to others and ultimately help them structure their lives into adulthood.

#9 I know you love parent/child adventures, so tell us how they help social development.

As you know from being a parent, Scott, kids are very hands-on and learn best when they are actively engaged. This is especially true when it comes to developing executive functions, learning to manage one’s emotions, and learning how to work with others. Going on outdoor adventures (be they in town or in nature) with your children and teens gives them ample opportunities to learn about natural consequences as well as opportunities to work through the many frustrations which arise while you are out in the environment. As kids get older, it’s great to bring friends and other parents along as you learn to share the work load and navigate those challenging emotions which are impacting the entire group. Most importantly, time away from modern life (especially electronics) allows you to bond with your kids, create emotional memories and participate in some life changing experiences. You can’t microwave your child’s development, just as you can’t speed through their academic growth. It takes time together. That’s the main reason I created www.adventuredad.org. All parents need a few ideas and tips in order to create their own adventures that will bring them closer to their kids.

#10 How does the social brain help us live in community?

On a larger scale, we know that the survival of the human species has favored those who can live and work in a community. It’s hard to entrust one’s future into the hands of others who can’t remember to complete their work, act on impulses, overreact emotionally or who can’t empathize with others around them. It’s our positive social skills which allow us to survive together. When children feel good about their pro-social skills, it allows them to serve the community and those around them. That’s the purpose of our social brains and for children having healthy self-esteem.

When it comes down to the family level, these social/emotional skills help couples form lasting, trusting relationships. Their marital relationships form the foundation for children to grow their relationship skills into the future. As I’m sure you feel the same way about helping couples, it’s very exciting and gratifying for me to help children and teens transform their negative skills and take responsibility for their social and emotional relationships.  Having at least one friend to share life with is the difference one candle makes when placed in a dark room.
Posted by Scott Stanley, Ph.D. at 5:38 PM